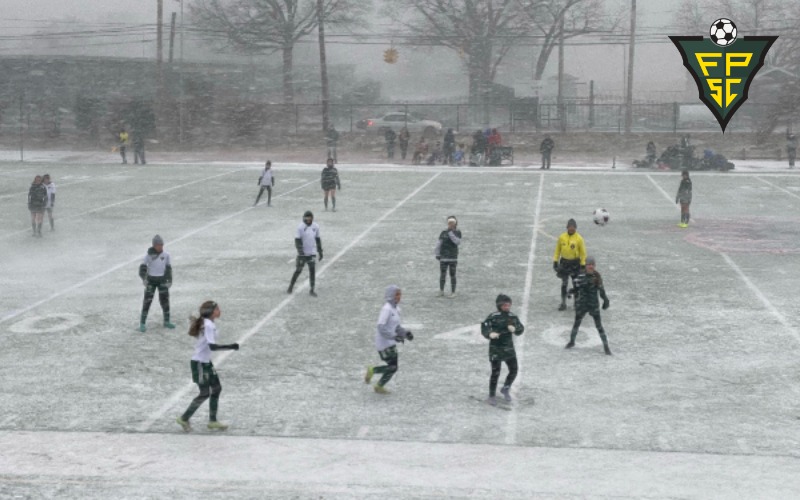 The Floral Park Soccer Club (FPSC) Chiefs-Yellow (Gu14) drew a familiar foe in the first round of the 2022 Eastern New York State Cup, the Huntington Tornadoes. The teams have squared off many times in the past, with Floral Park often on the losing end in their competitions. The last four games for the Chiefs against Huntington were: 0-2, 0-3, 0-2, 1-2. The two teams resumed their rivalry in the first round of the State Cup on March 19 at Floral Park Memorial High School. The temperature was below freezing and there was snow in the forecast yet the referee deemed the game playable.

Despite the bitter cold, with every player wearing pants, gloves and a hat, the Chiefs started strong, scoring two goals in the first half. Toward the end of the first half though, it started to flurry and then during half-time it began to snow hard. The ref still deemed the game playable, and so the game resumed with the Chiefs with a 2-0 lead. The second half started with blizzard like conditions with the wind favoring Huntington. Huntington scored two quick goals tying the game 2-2.

All signs pointed to another Huntington victory, given the extreme winds now pushing against the Floral Park side. Yet, the Chiefs withstood the Huntington barrage of shots with strong defense and superb goal-tending and found one opportunity to counter-attack. They charged up the field, crossed the ball, and shot the ball passed the goal tender, putting the Chiefs up 3-2! For the next twenty minutes the Chiefs continued playing strong defense and did all they could to prevent Huntington from tying the game. Unfortunately, in a fluke play, with only minutes left, the ball trickled back to their center backs’ feet, and from well behind half-field, their center back launched a ball into the air and into the wind, and the wind carried the ball into corner of the Floral Park net, tying the game 3-3. 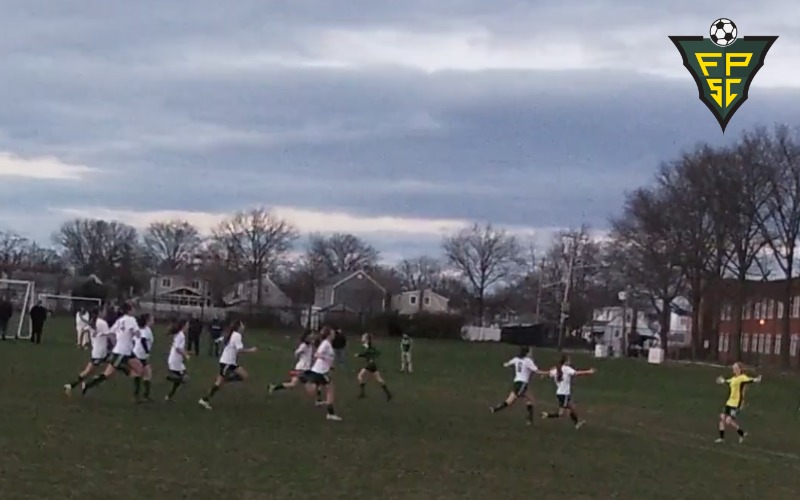 The game would remain 3-3 at the end of the regulation, and finally the referee decided to suspend the game for the day. The game would resume at overtime on another date.

The game continued on Friday, March 25 at 6:30pm, at Alva T. Stanforth Sports Complex. The Chiefs and Huntington both came out fierce, creating many opportunities to try and win the game and prevent it from going to penalty shots. The game remained tied after two overtime sessions.

The penalty shootout was nerve-wracking and intense. The Chiefs won the coin-toss and would shoot first to try to take control over the shootout. The shootout went back and forth with great shots and diving saves by both teams. Near the end of the first round of penalties, it was 2-2 and Huntington had the last shot to win the game. Their shooter missed wide, forcing the penalties into sudden death. The first three shooters in the second round from both teams made their shots, and so it was up to Huntington to keep the game alive. Their fourth shooter hit the ball over the net, and the Chiefs claimed victory! 3-3 (5-4).

The Chiefs now advance to the second round of the State Cup where they will play the Long Island Slammers on Saturday, April 9. Congratulations girls and Go Floral Park!